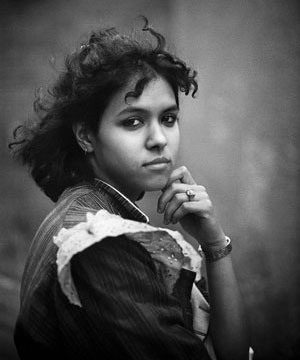 A Camera and Three Chords: Documenting the D.I.Y. Ethos of Punk - Blind

“Punk, in a strange way, saved my life,” musician Lizzie Borden says in Punk, Post Punk, New Wave: Onstage, Backstage, In Your Face, 1978-1991, a breathtaking collection of 162 photographs by Michael Grecco accompanied by essays by Fred Schneider of The B-52s and music journalist Jim Sullivan.

By the age of 13, Borden — who shares her birth name a woman who allegedly killed her family with an axe — was rocking at CBGB, the epicenter of New York’s burgeoning punk scene. “It was filthy, it was raw. It was sex, drugs, and rock ’n’ roll, and the bathrooms were disgusting,” she told Sullivan. “It was a group of people that not everyone wanted to join, but once you were in you were family….We would be up all night. Drugs, no sleep, more drugs. We lived in the streets. We squatted in Alphabet City. We lived punk rock.”

With “Do It Yourself” as the guiding ethos, punk encouraged all comers to make art without catering to careerist ambitions, commercial markets, or capitalist pretense. Stripped down to its bare essentials, punk was loud, angry, and raw — capturing the angst of adolescence and the disdain for the privileged politic of hippie ideology. With punk, anyone possessed with the audacity of youth could grab a guitar, jump on stage, thrash three chords, and howl at the moon.

Anarchy in the USA

“When I came of age in the late seventies and early eighties, it was in the middle of an artistic rebellion that changed the face of politics and culture forever,” Grecco writes in the foreword. “This was the era of Punk: bold, self-expressed, and free. An era of music, attitude, and fashion that spat in the face of the established norms.”

Hailing from what he describes as “an old-world Italian household in suburban New York,” Grecco felt stifled by respectability politics and societal rules. Punk set him free. “Walking into my first punk club in Boston at age eighteen, I found I suddenly joined a club where everybody belonged. I could finally be myself, or at least find out who I really was.”