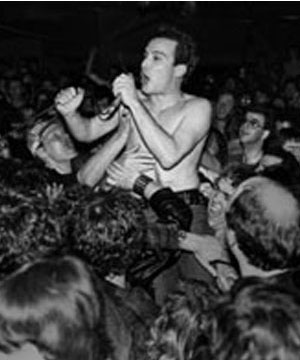 Michael Grecco had low expectations the night he walked into a Boston dive bar known as The Rat. A local punk band was on stage called La Peste – appropriately enough – but Grecco was more into jazz. It was 1978.

He’d turned up on a whim, he recalls, figuring a band named after an Albert Camus novel might possibly be interesting. Then the guitar and drums kicked in, and the lead singer launched into a deafening number called Better Off Dead.

From that moment, Grecco was hooked on punk – not just the music but the movement. He’d always been a keen photographer but it was punk that made him pursue it as a career, “as a way of getting closer to the bands,” he says.

And he did just that, snapping everyone from Johnny Rotten to Joan Jett, The Cramps to The Clash in a two-decade period that’s now being celebrated in an exhibition, Punk Days, about the American punk and new wave scene. “It was a movement” he insists, “a movement defined by its rawness, its authenticity”.

Punk is talked about as the sound of “youth rebellion” and that’s true, says Grecco, now 63. “But it was also a war – a class war in Britain but a musical war in America.”

The enemy, he believes, was the recording industry, which had grown greedy and complacent after selling so many records in the 1960s. “They were manufacturing crappy music on the whole and then you had these punk bands bust out and be self expressed,” he says. “They were explosive times.”

After that first punk experience, he immersed himself in clubs such as New York’s CBGB, wrangling a job as a photographer, initially with a music fanzine called Boston Rock and shooting the bands and protagonists, including Dead Kennedys, Ramones and Human Sexual Response.