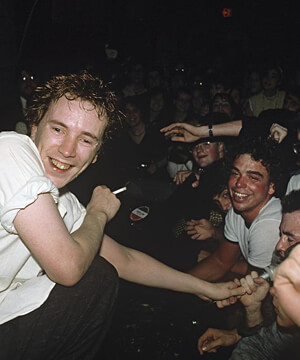 Anarchy in the USA - The Herald, Scotland

Michael Grecco’s vision of punk rock. The end of his new book Punk, Post Punk, New Wave, a compilation of images he took back at the end of the 1970s and the start of the 1980s, the photographer Michael Grecco sums up what that particular time meant to him.

“Upon reflection, looking back forty years,” he begins, “you have to think: ‘Wow, what an amazing life. Now, given my upbringing with an oppressive old-world Italian mother, of course, at times I felt guilty about it. You slept with someone new every night, you were always doing drugs, you were always drinking too much. I was having not just fun, but debauched fun – sex, drugs and rock ’n’ roll.”

Sex and drugs and rock ’n’ roll. More than four decades after the events chronicled in Grecco’s book we can argue about what punk rock meant back then, what it might still mean in the 21st century. We can look back at its nihilism, its otherness, its politics, its year-zero approach to pop culture and how that rippled out into the wider world.

But at some level it was always just another story about young people having fun in the messiest way possible. Grecco was one of them.

And so in the pages of Punk, Post Punk, New Wave there’s less talk of politics and principles and manifestos, more pictures of Wendy O Williams, from punk band the Plasmatics, topless, and a more or less naked Lux Interior of the Cramps (both onstage and off). And page after page of boys and girls posing with guitars.

Grecco’s photographs offer grungy visions of stage-front anarchy and back-stage intimacies. They are often as rough and ready as the music and musicians that inspired them. You could push it and say Grecco’s book is the visual equivalent of a Ramones single, a noisy explosion of images that catches the energy, the aggression and the chaos of the moment. “One, two, three, four …”