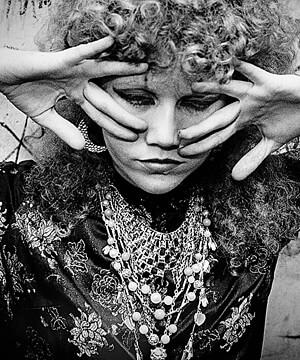 Michael Grecco grew up in the Boston area during the era of punk and new wave music. In fact, Boston was a center, if not the epicenter, of these movements. But in the 70s and 80s, when Grecco was shooting most of these images, a lot of the people featured in his book were from the yet-to-be-famous set. This was a distinct advantage for Grecco and it shows in this work. The photos here, many of which feature now-famous faces, (Elvis Costello, Joan Jett, Billy Idol, Lou Reed, etc.) are decidedly candid and intimate. Grecco has photographed a lot of famous people in the music industry and he has done so with great skill.

Many photography books have hit the scene in the past few years that roughly fall into this same category – photos of now-famous people from someone who had early access. Time, Susan Sontag claimed, makes even the most mundane photographs interesting. I believe this statement to be true. In this collection, some photos are indeed of interest because of their age but not nearly as many as in many other similar books. There is a lot of great photographs in this collection, photographs that would have been recognized as good photography even situated in their own time. Grecco has eyes and this book proves as much. It also brings his photography to a wholly new, contemporary, and likely broader, audience.