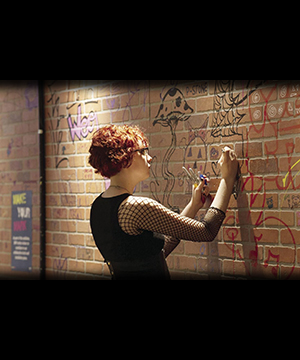 The Southeast Museum of Photography extended a warm welcome to photographer Michael Grecco and his exhibit, “Days of Punk” the evening of Aug. 30.

The collection made its U.S. debut in Daytona Beach, including an appearance and statements from Mr. Grecco during the opening, after premiering in London and Spain.

The exhibit follows the photographer’s interest and presence in the late ’70s to early ’90s punk rock scene, featuring pictures of several bands and performers across multiple concert venues. The collection is mainly derived from Mr. Grecco’s 2020 photo book “Punk, Post Punk, New Wave: Onstage, Backstage, In Your Face,” but with several photos making their premiere to the public through the exhibit.