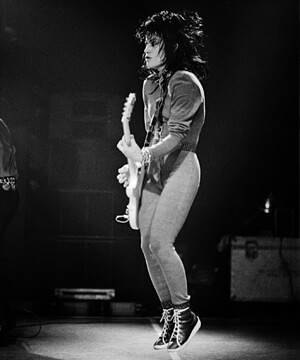 In “Punk, Post Punk, New Wave: Onstage, Backstage, In Your Face, 1978–1991,” photographer Michael Grecco chronicles the Boston punk scene of the late 1970s, which segued into the new wave and post-punk era of the early 1980s. This legendary time in musical history is depicted mostly in glossy black and white, never before seen, utterly captivating graphic imagery.

Some of it was captured while Grecco was living in Brookline. A New York native now based in Santa Monica, he studied broadcasting and film at Boston University. “I lived in Brookline for a year, bouncing around different parts of the city as a student and shooting,” he recalled.

“Brookline was much cleaner and not cockroach-infested like my previous Allston apartment,” he continued. “It was also good to be on the T to get into town on those party nights when you did not want to drive.”

The book is, rightfully, long on photography and short on verbiage. But it includes an introduction that was written just before the pandemic hit by Jim Sullivan, a veteran rock journalist who also approached the B52s’ Fred Schneider about penning an opening essay.