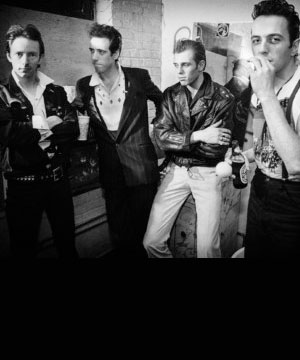 LOS ANGELES – In the very non-socially-distanced late 1970s, punk rock music grew and morphed into post-punk and new wave movements that prevailed into the 1990s. Back then, fine art, editorial and celebrity portrait photographer Michael Grecco – based in Los Angeles since 1988 – was a working photojournalist, shooting shows in Boston and New York almost nightly. His was a rare opportunity to embed himself in this revolutionary scene from the beginning, as a chronicler and participant – a self-described “club kid.” This previously unseen body of work comprises Grecco’s new book, Punk, Post Punk, New Wave: Onstage, Backstage, In Your Face, 1978–1991 (PPPNW) (Abrams Books, ISBN: 978-1-4197-4854-7).

“The spirit of Punk was extraordinary. It endures. It marked me forever. As you look at these images, I hope you also get touched by punk’s infectious freedom.” – Michael Grecco

This unique coffee-table volume is a bold time-capsule featuring 162 black-and-white and color images of punk and post-punk’s quintessential artists, with an introduction by veteran music journalist Jim Sullivan, and foreword by Fred Schneider of the B52s. Grecco’s photos capture the scene’s insurgent energy, onstage and off, with artists including The Clash, Elvis Costello, The Cramps, Talking Heads, Adam Ant, Joan Jett, the Ramones, The Plasmatics, and more.

In conjunction with the book’s publication, Grecco has launched the website Days of Punk. Along with a deeper dive into the book, the site features an extensive image gallery and a section on “PUNK,” a new TV series for ePix™ based on a concept by Grecco, who also served as an executive producer along with John Varvatos and Iggy Pop, aka the “Godfather of Punk.”