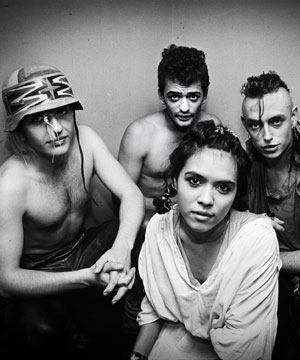 At this year’s Photo London 88 photo galleries exhibited images to around 35,000 visitors over the space of 5 days, showing prints by a wide range of photographers, including music-related photos by David Bailey, Kevin Cummins, Bob Gruen, Mick Rock and Daniel Kramer.  Michael Grecco’s space in a room in the basement of Somerset House was immediately striking, with huge prints of the book’s best images beautifully showcased on the walls. The images all appear in his book Punk Post Punk New Wave, published last October mid-pandemic.  With a new Collectors’ Edition due out in the next few weeks, it seemed a good opportunity to grab some time with Michael to chat about his experiences at the forefront of the punk/post punk/new wave music scene that exploded in Boston in the ’70s and ’80s.

LTW: In the book you talk about growing up in an Italian family in New York, where life was pretty restrictive and stifling. What influence did music have on you and how did you end up in Boston?

MG: I grew up in New York at a time when radio in general was really bad. I was one of the executive producers on a documentary film we did here on the FX Network called Punk – in researching that I discovered that record companies realised that selling records was more profitable than sporting event tickets, theatre tickets and live theatre – all of entertainment combined in ticket sales didn’t add up to what selling LPs got. So, they went into high gear after the ‘60s and started producing things that were sellable and that became music that I didn’t want to listen to, and I don’t know anyone else who wanted to listen to it – and that’s how you got all these bands like Styx, Journey and Kansas, with built-in hooks and polished musicianship.

I was turned off by it, as a kid I was living in New York and was a music snob. I was heavily into Velvet Underground, loved Bowie, hadn’t really spent a lot of time listening to Iggy Pop yet – I got more exposed to him when I moved to Boston – but liked Roxy Music for the Eno production and its cleverness. So, I had a couple of rock bands that I loved but I was mainly a jazz listener. I would go to clubs and listen to Keith Jarrett, Charlie Mingus, Thelonious Monk, Chick Corea and Stanley Clarke and I judged music that way, on its creativity. If you were a boring improviser and you went in circles, I didn’t value what you had to say as a musician.

So, in that group and looking at music that way I also listened to Duane Allman, Eric Clapton, and Hendrix of course, because they were clever, interesting and they had something to say as an improviser. I’d listen to all of this based on musicianship because my frame of reference was jazz.