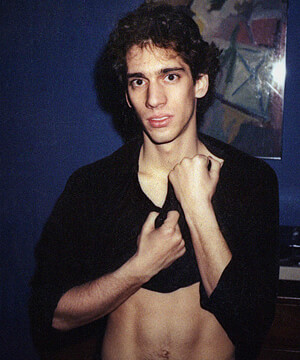 Michael Grecco has enjoyed a long and distinguished career as an editorial and fine art photographer. Traveling the globe many times over in pursuit of his gigs, subjects, and ideas, he’s one of those curious-minded professionals whose creativity doesn’t end with the job, but extends to exploring the sights and sites of every place he visits. He’s known for emotional, evocative, innovative portraits of some of the best-known faces and brands out there. But like so many great eyes of his time, the punk rock scene of the late 70’s and 80’s, on both coasts, helped formulate his artistic individualism. Now that heady decade and a half are collected not only in his camera, but in the lavish new coffee table book Punk, Post Punk, New Wave: Onstage, Backstage, In Your Face, 1978 to 1991. Along with Oedipus and Tami Heidi, he’ll be discussing it — and hopefully oversharing what must be some pretty legendary stories — at Book Soup on Wednesday, November 11 (6pm).

L.A. WEEKLY: WHEN DID YOU FIRST KNOW YOU WERE AN ARTIST?

MICHAEL GRECCO: That’s an interesting question. In the ‘70s, when I started creating work as a photographer, there was a great debate about whether photography was an art form. Since it was a mechanical recording of the world (sometimes), many disparaged it as fine art. Susan Sontag’s On Photography at the time both asked many of these important questions, and at the same time answered the question of whether photography was an art form or not. At this point, I do not believe there is a question about it, photography is one of our most powerful art forms. So to answer your question, once I picked up a camera when I was a kid and I knew I wanted to be a photographer, but it was a little bit later until I understood the power of photography in the art world.

WHAT IS YOUR SHORT ANSWER TO PEOPLE WHO ASK WHAT YOUR WORK IS ABOUT?

Well, normally I would say that I create powerful dramatically lit conceptual portraits of celebrities and business people. My latest book though is called Punk, Post Punk, New Wave: Onstage, Backstage, In Your Face, 1978 to 1991, and it’s a document of the Punk scene from 1978 to 1991, documentary images and portraits. It’s a little different from what I am known for, but I think you can see the through line in it. I love shooting portraits and documenting subcultures. My company saying is, “I go out every day with the intention of breaking visual rules, to make an evocative image that inspires people.” That about sums it up for me, and Punk helped bring me to that place of creativity.