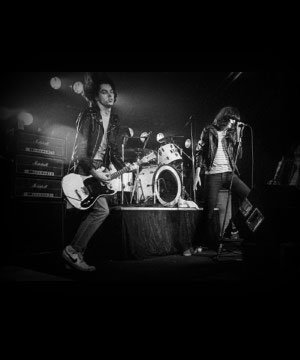 Michael Grecco’s “Days of Punk” U.S. premier will be in Daytona - Hometown News

The show is presented in partnership with the Lisbon, Portugal-based production firm Terra Esplendida. It will run through Dec. 17, and marks the first time “Days of Punk” will be shown in the United States. There was a special public installation at Photo London, an international photography fair .

The Museum will host an opening reception for “Days of Punk” from 6-8 p.m. Tuesday, Aug. 30, including an artist lecture by Mr. Grecco in the Madorsky Theater. Copies of his book “Punk, Post Punk, New Wave: Onstage, Backstage, In Your Face, 1978–1991” will be available to buy and get signed. The reception is free and open to the public, but reservations are encouraged at eventbrite.com or southeastmuseumofphotography.com, or call (386) 506-3894.

The more than 100 photographs in the exhibit date back to the late ‘70s through the early ‘90s, when Mr. Grecco documented the nightclub and concert scenes in New York and Boston as punk roared into the U.S. He was working as an Associated Press photographer, and lensman for legendary rock station WBCN-FM, and was a self-described “club kid” who had a unique opportunity to embed himself into the revolutionary scene as both a chronicler and a participant. He captured for posterity a riotously outspoken time in pop culture history, with all its raw energy and outrageous antics.