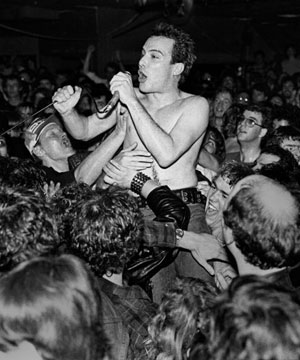 “Every picture tells a story, don’t it?” as Rod Stewart would intone from the mic. There’s also the adage, “A picture is worth a thousand words” and it holds true. Rocker, author, director and photographer Michael Grecco started out his career as a photographer in the gritty clubs of Boston and New York, supported by his work for the AP and The Boston Globe, documenting a wave of musical artists and cultural innovators that eventually shook the world. Michael’s book “Punk, Post Punk, New Wave: Onstage, Backstage, In Your Face, 1978-1991” offers a  vital and raw view of the early Punk and alternative music scene, drawn from a DIY point of view of that youth culture and its music in most dramatic black and white.

It’s not an understatement for me to say that Michael Grecco’s early Punk photographers are part of my psyche, my Punk ethos, and a part of my inner dialogue of what is and what Punk represents to me. It would also be accurate to say his photos defined and informed my early Punk Rock experiences as I perused East Coast publications like “New York Rocker,” seeking the real deal in Punk. I poured over those publications in the late ’70s and early ’80s which proved foundational to my view and experiences as a Punk Rocker. The energy and power that these performers delivered were caught in Grecco’s lens and defined a worldview different from the cultural elites’ of the time, delivering the urgency and honesty of the moment, and producing engaging visuals that have stood the test of time.