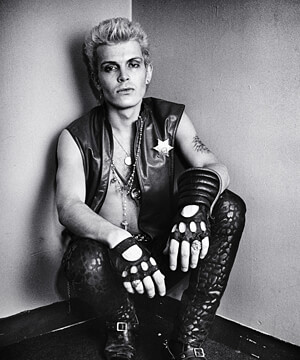 Michael Grecco’s brand new book, “Punk, Post Punk, New Wave: Onstage, Backstage, In Your Face, 1978–1991” features more than 160 previously unseen photos from the heyday of the explosive punk rock movement in the United States. Working for the Associated Press in Boston as a photojournalist at the time, Grecco freelanced for local cultural media outlets, including the legendary radio station WBCN-FM. He had a unique opportunity to be embedded inside this unprecedented scene from the beginning.

Both a chronicler of and participant in this music revolution, Grecco captured in-your-face performance moments and backstage shots with bands including The Cramps, The Clash, Dead Kennedys, Talking Heads, Human Sexual Response, Adam Ant, Elvis Costello, Joan Jett, The Ramones, and many others.  His black and white and color images bring to life the raw energy, power, and anarchy that characterized this unforgettable and insurgent music and pop culture phenomenon.

In addition to concert photography, Grecco shot album covers and promotional pieces that round out the book’s impressively extensive photo collection. Also featuring a foreword from Fred Schneider of the B-52s and an introduction by veteran music journalist Jim Sullivan, “Punk, Post Punk, New Wave” is a quintessential piece of music history for anyone looking for backstage access into the wild days and nights of punk and post punk’s most notorious bands.