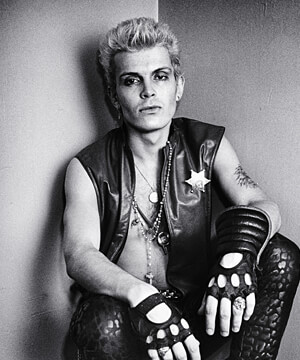 From the late 1970s through the early 1990s, photographer/filmmaker Michael Grecco documented the music scene in New York and Boston when punk rock exploded in the U.S. This insurgent pop culture phenomenon later morphed into post-punk and new wave genres. As an Associated Press photographer – and self-described “club kid” – Grecco had a unique opportunity to embed himself into this revolutionary movement as a chronicler and a participant.

Its publication marked the first time these photos were introduced for viewing by the public and collectors. Grecco shot album covers and promotional pieces that round out the volume, which also includes personal anecdotes from back in the day. To view available fine-art prints: https://daysofpunk.com/punk-images/punk-fine-art-prints

Grecco and London-based Iconic Images have announced that this bold time capsule will be offered as a deluxe, limited release Collector’s Edition this fall. Packaged in a custom clamshell, it comes in seven different configurations, each containing at least one signed/numbered print, and a certificate of authenticity. For Pre-orders: https://collectors.daysofpunk.com/.

Also in association with Iconic, these photographs comprise the inaugural showing of “Days of Punk,” Grecco’s multimedia exhibition inside Somerset House at Photo London 2021, September 9th-12th. Soundscapes are in collaboration with Roger Miller and Peter Prescott of the band Mission of Burma. The video component, created in collaboration with Jeremy Troy, includes archival footage that Grecco shot in the punk era. For more information: https://photolondon.org/exhibitors/2021-2/michael-grecco-productions-in-association-with-iconic-images/

About the Publisher:
Founded in 1949, ABRAMS was the first company in the U.S. to specialize in publishing art and illustrated books. The company continues to publish critically acclaimed, best-selling works in the areas of art, photography, cooking, craft, comics, interior design, entertainment, fashion, and popular culture.