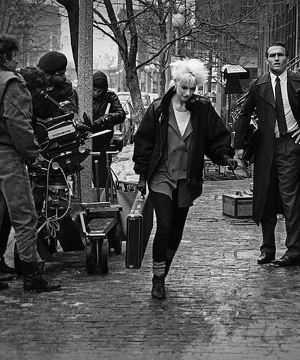 If you wanted to get an indoor photo during the first wave of punk rock, you needed a camera that you could adjust the settings on, and you had to learn what the settings were. That didn’t really change until the advent of digital photography, which makes photographs from this era extra rare. Many people who would have been interested in the subject matter, might have been hesitant to carry their only camera into a place with potentially hostile subjects. Abrams recently threw their hat into the mosh pit with a book of photographs by formerly Boston-based photographer Michael Grecco (who is now based in Los Angeles).

Boston was big and urban enough to be included on band tours of the United States. There were numerous important venues in the city. The book is organized by the venues where the photos were shot. (with a text describing the nature and size of the venues) There are also a few shots of CBGB’s in Manhattan. Jim Sullivan, and Fred Schneider of the B-52’s offer a few pages of reminisces about the era in which the photos were shot. Each venue gets a few paragraphs about what made that venue special.

The photos aren’t labeled, but there is an index in the back that lists what page people are on, if you know to look for them by name. If you like this work, the photographer will be having shows of these photos over the next year. For more information on those visit https://daysofpunk.com/punk-images/showcase-galleries