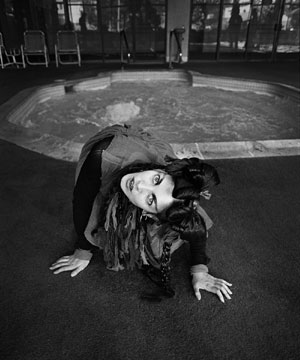 In 2017, I was inspired to start combing through my archives of the punk and rock ‘n roll photos that I shot when I was living in Boston during college and after, shooting for the Associated Press, and for the legendary FM station WBCN-FM. Thousands of images had been stored for decades, never seeing the light of day. In revisiting this body of work, I more than anything wanted it to be seen. The result is my latest book, Post, Post-Punk, New Wave: Onstage, Backstage, In Your Face, 1978-1991, published by Abrams Books in November 2020.

I launched a companion website, Days of Punk and created a multi-media exhibition that premiered at Photo London in September 21. These images are available as fine art prints to collectors for the first time, and our plans are to tour the world with the exhibit.

One of the best things about this is that it connected me to a transformative time in my life. When I came of age in the late ‘70s and early ‘80s, it was in the middle of an artistic rebellion that changed the face of politics and culture forever. This was the era of Punk; bold, self-expressed and free. An era of music, attitude and fashion that spat in the face of the established norms.

I had grown up in an old-world Italian household in suburban New York. Tradition and rules marked my childhood. I was told how to be, how not to be. I felt stifled. Walking into my first punk club in Boston at age eighteen, I found I’d suddenly joined a club where everybody belonged. I could finally be myself, or at least find out who I really was.

Wear what you want! Say what you want! Make music however you want! In this culture of acceptance, myself and countless others dove headfirst into a journey of social and artistic freedom. This was my life back then in sticky, black-walled punk clubs at night, with acts that would eventually become legends. I toted my 35mm film camera, and captured punk stars on stage, behind the curtain, and on gritty streets. Many of them became good friends.