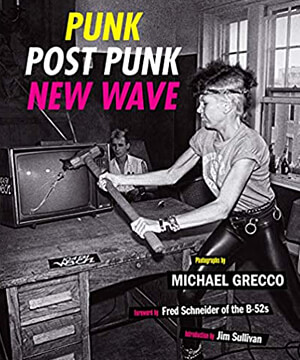 The ultra-descriptive title of Michael Grecco’s latest bound collection of photographs published by Abrams, Punk, Post Punk, New Wave: Onstage, Backstage, In Your Face, 1978-1991, exists in subtle contrast to “Days of Punk,” the compact domain of its companion virtual experience. The former spans over a decade, traveling through comma across genre and venue, while the latter suggests a more indistinct and fleeting moment. In 162 photographs, mostly black and white, Grecco offers a snapshot of both a specific historical period and an enduring state of mind, rendering numerous the ways in which spectators and performers alike have shown up to the spirit of punk in Boston. Wendy O. Williams, for example, of Plasmatics eminence, is pictured on the frontispiece taking a sledgehammer to a television, gashing the screen. Stickers for WBCN, a local radio station, are affixed to the surrounding furniture. Title and contributor details appear similarly pasted to the cover in a Sex Pistols palette (yellow, white, and hot pink) in false collage, such as on a photocopied zine or album cover. Contemporaneous newspaper clippings wrap the endsheets and book block. Fred Schneider, of The B-52s, and Jim Sullivan (music journalist, not disappeared psych-folk musician) contribute candidly to the foreword and introduction with fond remembrances of the time documented.

Organized approximately by stage, each grouping of photographs is awash in a localized memory captioned further by Grecco in occasional text blocks detailing gritty and inviting gossip from the ground. Personal highlights include images of Siouxsie and the Banshees and Lene Lovich and, too, the general feeling of rolling in the vibrant wake of a crowd that emanates from much of the book. Below, Michael Grecco offers a backstage tour of the publication, as well as advice for aspiring documentarians, lighting tricks, and plans for future installations. Our conversation has been edited for length and clarity.

CORI HUTCHINSON: Can you briefly describe the Boston scene you capture in the book?

MICHAEL GRECCO: I think the Boston scene was like every other scene. Historically, it was an early scene. We had the first college radio punk show, the Late Risers’ Club, at the MIT college radio station. There’s a large number of higher learning institutes in Boston. I think the music caught on early and the punk radio shows caught on early. The scene itself was a bunch of kids frustrated and unhappy with commercial radio and with what record companies were putting out; they wanted something authentic and this is what everyone gravitated toward.

CH: Following that point, could you speak to the significance of the college radio station as a physical space beyond the airwaves?

MG: You have to remember that in the late 70s and early 80s, until we had MTV, radio was the way we listened to our music. Commercial radio was extremely formatted; no one took the risk. The college scene was this underground scene that broke all of this new music. There were people who hung out in the clubs and listened to that music and then heard it and picked up the EP from that new, local band, or went to The Rat and heard The Police play for the first time in the United States. I mean, I was at all of those shows, and the DJs from the college radio shows were part of the community. After hearing something that they liked, they would play it. It was a community. It was a culture unto itself. We all hung out.