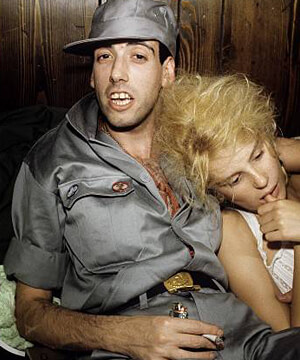 Acclaimed photographer Michael Grecco brings us back to the chaotic energy of punk rock era in the late 70s to early 90s in his newest collection of images, Punk, Post Punk, New Wave: Onstage, Backstage, In Your Face, 1978-1991. Grecco shares black-and-white shots of bands that defined the punk rock genre, including The B-52’s, The Dead Kennedys, and the Ramones. GBH’s Henry Santoro spoke with Grecco about his experience capturing a revolutionary music scene. The transcript below has been edited for clarity.

Henry Santoro: Thanks to a tremendous amount of colleges and universities in such a small proximity, Boston has always been chock full of young people, people on the forefront of trends and on the look out of the next big thing or people who just want to fit in. And it’s because of all that, Boston became an epicenter for a very, very vibrant music scene. Enter photographer Michael Grecco, who brings us back to the chaotic energy of the music scenes from the 1970s all the way up to the early nineties with his new book, Punk, Post Punk, New Wave: Onstage, Backstage, In Your Face, 1978–1991. This is an art book, a tremendous coffee table book that is full of photos and stories of bands that were little known back then but are household names now. And it’s my pleasure to welcome Michael Grecco, my dear friend Michael Greco, to GBH. How are you, Michael?

Michael Grecco: Thank you, Henry. I’m doing great. I’m doing really great. I don’t know if your listeners knew that you were part of that scene and we were pals and you were working the bar at Spit and all the after parties with all of these bands. And the people you liked — I must have been blessed — you passed out free drinks, too. You know, it was a time of partying and revelry.